PUBG Mobile is going to do something that hasn’t ever happened before in gaming history. Fans have created many such comedy videos on the PUBG Mobile theme since the game became famous. All such videos are very much famous on youtube. But for the very first time in Indian gaming, PUBG Mobile is creating its original web series.

PUBG Mobile recently revealed that they are soon going to lunch an Indian Web Series based on PUBG theme. They have twitted on their twitter about this news. It says, “Dosti Ka Naya Maidan – A PUBG MOBILE web series with episode one launching this Christmas! Five epic stories of friendship, fun, and masti!”. According to this, they have almost finished making their first episode, and it will going be released on Christmas Eve. As always, players are giving a very good response to this too.

PUBG Mobile also released a 30-second trailer that is going viral on the Internet. According to Tencent Games, PUBG Mobile is losing its popularity from the last few months. So, they have decided to engage their players with this web series Dosti Ka Naya Maidan. 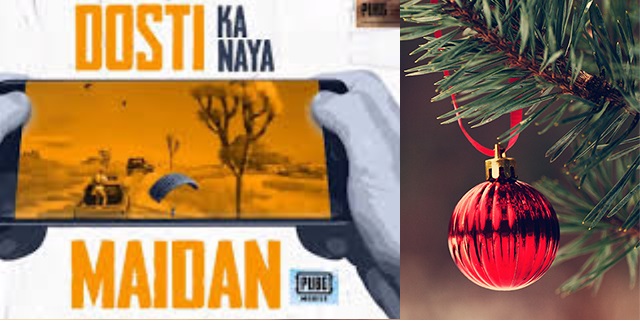 The episodes of Dosti Ka Naya Maidan are going to be completely different from each other. Every episode is going to be a different story. According to the sources, the first episode is going to be released this Christmas Eve. People are very excited about this too. PUBG Mobile also sharing it with all the Indian PUBG Mobile players with their sponsoring ads on Instagram, Facebook, Twitter, Youtube, etc.
This web series is going to be in Hindi. As you can see in the trailer, some dialogues are written in Hindi, which is also taken from famous PUBG Mobile streamers from India.
DKNM Star Cast/Actors: Recently in a sponsored ad on Instagram, PUBG Mobile has revealed some of the faces of the actors that are going to be seen in the first episode of PUBG Mobile web series. AADII SAWANT from Dynamo Gaming, RAWKNEE from Rawknee gaming, KRONTEN from Kronten Gaming, CHINMAI, ALAM KHAN, BADREE, some of his fellow gamers will be the cast actors in the DKNM web series. However, it is not confirmed about their role in every episode. There some other PUBG Mobile players too who are from a different country. Almost 20 PUBG Mobile players going to be seen in this PUBG Mobile web series: Dosti Ki Naya Maidan.
The story/ Plot: Nothing has come out about the story of the first episode. PUBG Mobile only mentioned that every episode is going to be based on different stories. Talking about possibilities, PUBG Mobile gave us an idea of what we will see in the first episode. The will be different teams just like the game. The main story will focus on the team from India and they will speak in Hindi. Players will start their game who came from different places. They will need each other in their hard time, Sometimes they will out of ammo in the middle of a fight or sometime they will be a revive from their teammate. After crossing so many dramatic scenes and going through hard firefights. The team of 4 unknown players stays together and wins together. PUBG Mobile will their players the meaning of true unity in the game.

When PUBG Mobile Web Series will be released?

PUBG Mobile Web Series: Dosti Ki Naya Maidan Episode 1 will be released on 25 December 2019. PUBG Mobile posted on twitter that the first episode of this web series is going to launch on this Christmas.
Final Words: First-time people will watch mobile game web series in India which is also in Hindi. This is going to be great and prestigious for all of us. PUBG Mobile is almost done with the shooting and editing. Just wait for the Christmas until den happy pubg mobile winter festival.

Thanks for reading. For any query please leave a comment below.
Also Read: Increase PC performance to Fix Lags in PUBG Mobile Emulator(Low-End PC)
How To Remove PUBG Mobile Account from Facebook, Twitter, Google