PUBG Mobile game is becoming a very hit game in the year 2020 also. Recently, the game is going viral for another reason which is a Hindi Web Series called Dosti Ka Naya Maidan(DKNM). PUBG Mobile has already released 4 episodes of this web series and now they are again ready with another Episode which is Ep 5. Yes, DKNM Episode 5 is coming with more excitement next week. Some of the famous stars from India including the famous Scout from PUBG Mobile itself are going to be featured in this 5th Episode. There are some other featuring Star Cast in DKNM Ep 5 which I am going to tell you about.

PUBG Mobile India Official is all set to release the next Episode of DKNM. The Ep4 was released on 4th February. However, the 5th Episode of Dosti Ka Naya Maidan Web Series will be released on 14th February(Next Week). PUBG Mobile soon going to release the trailer too. They haven’t also shared any post for this upcoming episode yet.
The previous episode featured Shardul Bhardwaj, Pranay Manchanda, Viraj Ghelani, Ghatak, K18, and Lovleen Misra. It got 1 million on views under only 24 hours and it seems Indian PUBG Mobile lovers are once again showing so much love to PUBG Mobile India Community. However, this time the game has decided to release the 5th episode on the day of Valentine with more exciting things.

Dosti Ka Naya Maidan Ep5 is featuring some of the best actors from India. Like the last 4 episodes, this episode will also feature the 4 friends who are crazy for PUBG Mobile. Also, two PUBG Mobile stars will also be seen in this episode too. In this 5th Episode, you will see the coolest PUBG Mobile Esport Star Scout and Sreeman Legend. 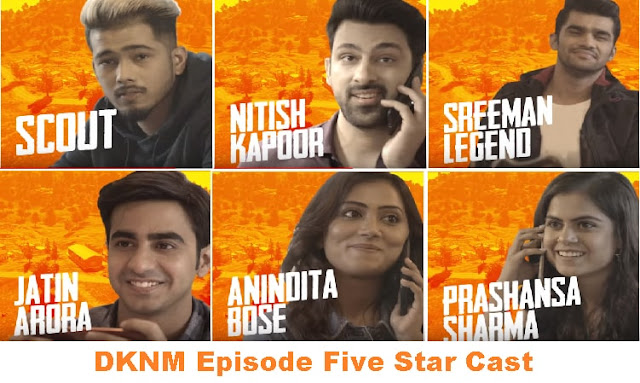 Soon to be Updated…

Final Words: PUBG Mobile-based Web Series Dosti Ka Naya Maidan(DKNM) Episode Five is all set to be released. Viewsers have to wait till Valentine’s day this week. The famous Sreeman Legend and Scout are also going to feature this Ep 5. Stay Tuned for the trailer, the story of and more update released to DKNM Episode 5.
I hope you like this and don’t forget to share it with your friends.
Also Read: PUBGM Dosti Ka Naya Maidan Episode 4 Star Cast, Plot, Release Date