The good news is PUBG Mobile came with a new mode just yesterday where we can experience both the Payload and War mode together. Yes, Now PUBG Mobile is letting us to play War Mode in Payload style. 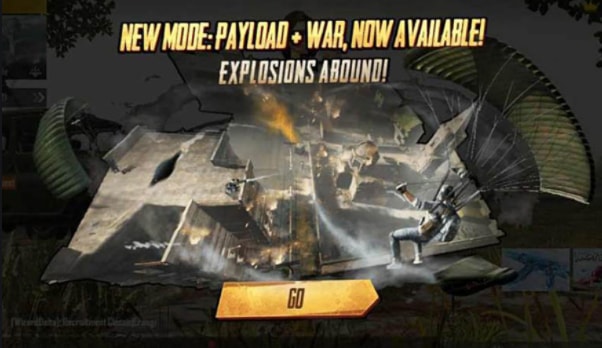 War mode in PUBG Mobile is quite popular among the players. Many players like to practice in war mode because of its unlimited respawn feature. But these days Payload mode is getting more viral also. Everyone loved the previous update of Payload mode where we can fly helicopters, use RPG, and fire rocket launchers, and we can kill as many enemies with granade launchers or get a instant respawn after getting killed in the field.

Glad to let you know that Tencent Games have recently given a new update in PUBG Mobile. Players will now be able to access a new game mode in EvoGround matches. This new mode is called the Payload X War mode. You will find this new mode in the EvoGround section in PUBG Mobile. In this mode, players will be able to play War mode in the Payload style. This new mode has arrived on 24 December. I suppose this was the Christmas surprise from PUBG Mobile. Players are quite surprised to see this amazing mode added by PUBG. However, there was no expectation this time because PUBG Mobile never mentioned about this mode earlier.

EvoGround Mode: PUBG Mobile has three different game modes. Players can choose their favorite model from the matchmaking section. However, the third option is called EvoGround. In this section, you will see a bunch of different modes that are much more interesting than others. Payload X War Mode is one of them.

Payload X War Mode: This new model is a combination of Payload and War mode. In War Mode, we get a random weapon, one health kit, 5 bandages, and some ammo. Everyone fight in a small area of the map until the match gets finished. Everyone gets respawned after every time they die.

Final Words: Payload X War mode comes handy for those who are new to Payload mode. Many players don’t know how to shoot a target with MGL grenade launcher or RPG7. If you want to make yourself a pro at payload mode than this new model is just for you. Play hard and learn more in the new Payload X War mode now.

Thanks for reading. I hope it will help you to find some new things. If you have any query you can comment down below.