PUBG Mobile soon going to add a new 0.17.0 version in the next update. This update is expected to bring many new things such as new guns, Winter mode, mini playground and more. However, the game will also bring a new map called Karakin in the upcoming updates. The Karakin map was released in the PUBG PC on the 22nd of January, and it will also going to be added to PUBG Mobile soon. Today, I am going to tell you about detailed information about this new upcoming Karakin Map. It has many amazing features that will blow your mind.
Recently PlayerUnknown’s Battleground has released a new map in the PC version of PUBG. So, players are very much excited to get this map in the mobile version too. It is quite settled that this map will be in the mobile version of PUBG soon but we can get the idea that the map is not coming in the PUBGM 0.17.0 update. The beta version of 0.17.0 has been released already, and the official release is expected to be on 28th January. But, there is no scene of the new Karakin map in it.

PUBG Mobile soon going to add a new map called Karakin Map. it is quite a small island that is full of new things in it. Karakin Map is a 2*2 KM island that almost looks like Miramar. As you can see on the map, it is a square-shaped map with no river in it. It is basically a desert with several abandoned towns and many houses. The island has all the towns on its seaside, as you can see. The towns are full of one-story houses and warehouses. Also, the players will see full of palm trees on Karakin Island, PUBG. 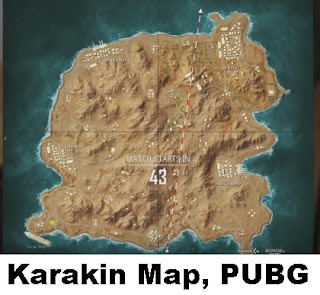 The map is meant to replace the Vikendi map in Players’Unknown BattleGround PC version. However, players will be able to play the classic Vikendi map on custom matches. Also, the map is quite small, it will only contain 64 players in it instead of 100 players, according to PUBG Corp. Now, let’s talk about its features and new things.

This new map has a brand new feature that was never in PUBG before. We all know that we have a red zone where the plane drops bombs. Normally, the bombs don’t do much in the other maps. Mostly it kills people or destroys vehicles that come under it. But the new map Karakin is a different zone which is a purple zone. The Purple zone is a danger zone that meant to drop nuclear bombs in it, and these bombs destroy every house, and building that comes under it. 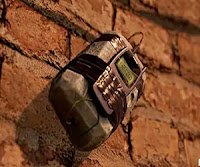 Players will also see a new item called C4. C4 is a new kind of a sticky bomb. It looks like a small bag with a mobile phone attached to it, as you can see in the photo. Players can stick this bomb on the walls or trees to set a trap for the enemy players. This bomb gets activated as soon as you put it in walls or anywhere, and it stays like this until it detects any player nearby. As soon as a player comes close to this bomb it explodes. The C4 sticky bomb becomes very essential when it comes to exploding a wall in Karakin Map. There are many places which have no doors. You have to find these sticky bombs to enter these no-door buildings.

Yes, exploding wall means, players can be able to set a bomb to the weakened brick walls of  Karakin Map. These walls can easily be recognized by seeing them. There are many places in the Karakin map which have bunkers in it. These sticky bombs can be used to destroy a wall and enter into the bunkers to get some loot.

Also, the Karakin map has another kind wall called weak walls. These walls are very weak and can be shot through it. Players can hide behind these walls but can not be safe from the bullets. Yes, bullets can easily penetrate these walls and kill enemies hiding behind it.

The new Karakin map was released on 22nd January on the PC version of PUBG. The map has many new things in it, and we have to wait a little more time to enjoy this map in PUBG Mobile. As we all know that the 0.17.0 version is near. So, we can expect this version in the 0.17.5 version update or 0.18.0 version update.

So, stay tuned and stay updated by bookmarking our page. We will provide the latest news.

Also read: Chinese PUBG Mobile Beta version to get Erangel 2.0 update, What about the Global version?