Skip to content
PUBG Mobile is once again coming with a new update in a few days. Yes, I am talking about the upcoming PUBG Mobile 0.17.0. I have talked about all the upcoming features that are coming this with the update in my other article. However, today I am going to talk about the PUBG Mobile 0.17.0 exclusive character Carlo.
PUBG Mobile version already has two existing characters which are Sara and Victor. This time Tencent has settled to bring a new character called Carlo. Like the other two special characters, this one is also going to have a specialty. Also, PUBG Mobile game will bring different events for this character too. Today in this article I am going to share with you all the details of this New upcoming Character Carlo. Check Release date, New emotes, Speciality, and more. 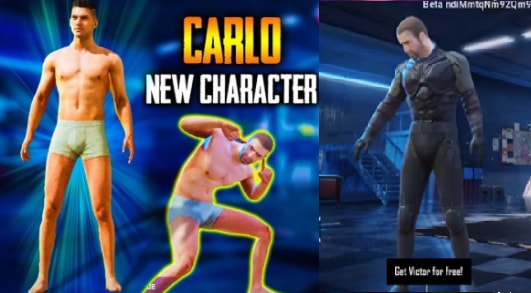 PUBG Mobile is all set to release the new upcoming character Carlo with the 0.17.0 update. The update will come at the end of February or at the beginning of March. The character has been added to the beta version already. Players can check by downloading the news beta version of PUBG Mobile. Like the other two PUBG Mobile characters Victor and Sara, this character also has some specialties. Some leaks have been revealed for the character Carlo from the Beta PUBG Mobile which includes brand new Emotes, Carlo’s special moves, and voice message.

As of the latest Beta version of PUBG Mobile, Carlo has 4 different emotes. These emotes are very unique and cool. One of them is a grenade-throwing emotes and another one is Checking bullets emote. Also, there are several special emotes that are only available for Carlo. Besides the emotes, Carlo also have some special voice notes and outfits which are going to be available after the 0.17.0 update.

As we all know that PUBG Mobile brings these kinds of new characters with some special ability. We already have victor who is an expert in SMG guns. The damage point increased and the reload time decreases when Victor is using an SMG gun. Just like that Sara has also the special ability for Vehicles.
Like these two special PUBG Mobile character, Carlo also has some unique ability. As it shows, he might be a gun expert like Victor. We can already see, that he has an emote. In that emote he checks his 7.62 bullets. So, we can have a pretty good idea that Carlo is going to be an ammo or gun expert. Or maybe a recoil master.

Final Words: Tencent made a confirmation to release Carlo with the next PUBG Mobile update 0.17.0. Players are expecting this new Character Carlo in PUBG Mobile and they are very much excited about this. As you already have seen the appearance of Character Carlo. It looks quite handsome with a cool hairstyle. If you also want to unlock Carlo then stay tuned for more PUBG Mobile updates. Also, Check every upcoming Carlo Emotes from the Mr.GhostGaming YouTube Channel.
I hope you like this article, and please don’t forget to share it with your friends.Also Read: [100% working]How to Get 7000 Free UC in PUBG Mobile