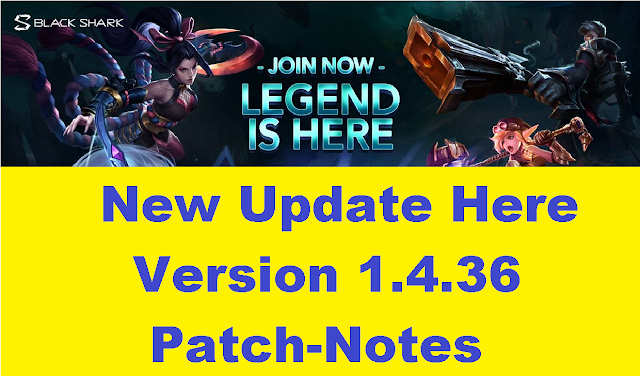 With this December update, Mobile Legends has made many changes in the game. Players are going to have a whole new level of experience. From the graphics quality in the map designs to new magical features, many new things have arrived with version 1.4.36 update in Mobile Legends: Bang Bang.

Redesigned Buff: We all know that Buff appears to provide the bonus effect. The effects also depend on the class of the hero. After this update buff will be a little bit different. There will be two different buffs with different bonus effects in the game. One is the purple buff and the other one orange buff.

BattleField Bushes: The bushes on the battlefield are also redesigned. Now you will see the light amount of bushes so that players can’t hide in there.

New Creature: Mobile Legends has also added this new creature on the battlefield. You will see two of them. These crab-like monsters stay in the river. The player who will kill this crab-like monster will obtain a buff that will regain your Health and Mana.

Cyclone Eyes: Cyclone Eyes are the new thing that can give you some amazing ability to obtain more possibilities while you are surrounded by enemies. There will be 4 cyclone eyes placed in the 4 corners of the battlefield.
By obtaining a Cyclone Eye, players will obtain a special power to go through rocks. With this special ability, one can run faster and go through rocks. Going through rocks will help you to escape enemies and attack from a special angle to give them massive damage on the first strike.

There are a new ranking system and leader board in the game, especially for Chess-TD mode. Play more and rank higher to show up and become famous on Mobile Legends: Bang Bang Chess TD Leaderboard.

After the end of Season 14, Mobile Legends has brought you all-new exciting Christmas gifts for their players. This time you can get an amazing character which is Imperial Knightess Princess Silvanna. If you logged into the game on 12th December then you must have collected a card which was provided for this character. Log into the game again after 17th December in Mobile Legends to redeem this character for free.
Princess Silvanna: The princess of Monian Ampire, Silvanna is the strongest warrior who possesses the power of stunning a single enemy in a sec. She has this power that no one has. Get Princess Silvanna for free after 17th December by redeeming it with your card.
More from Mobile Legends: Bang Bang: This time, also many Christmas special gifts awaits for the players. According to the update notes, you can preorder them and log in on 28th December to claim the cool Christmas gifts.
Final Words: Players are excited about this update of Mobile Legends: Bang Bang 1.4.36. All you have to do is play and explore the game to claim your exclusive Christmas gift. So, don’t wait to go now and claim them all before December ends.

I hope this will article will help you with some of the information. Make sure you bookmark our page and keep visiting to find more content.