Skip to content
Finally, Erangel 2.0 Remastered is coming to PUBG Mobile. Recently in several news articles and YouTube videos, it is going viral that the Chinese version of PUBG Mobile beta will get the Erangel 2.0 map in the upcoming update. Everyone is very excited about the new classic Erangel 2.0 map, and many are wondering when the global version will get this new map. 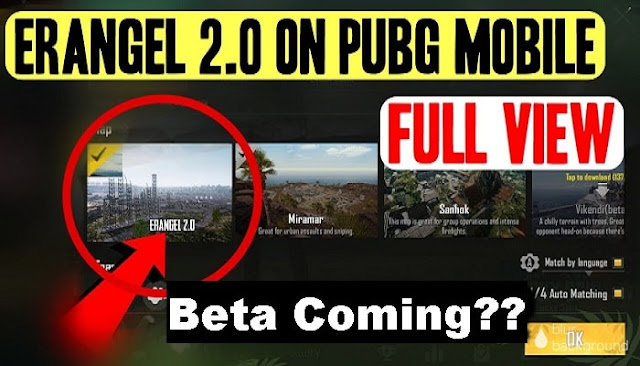 Tencent Game already had released a teaser for the Erangel 2.0 map in the last year 2019. It was very much similar to the futuristic Erangel 2.0 of PUBG PC. Now it seems the developers have completed their work on the map and it is ready to be released. Tencent will first release the map on the Beta version of Game Of Peace(Chinese PUBG Mobile) which is not out yet, but some of the famous content creators already have access to the Beta version.

As you can see, the map looks very futuristic and real. It is also very well developed on the side of graphics. The video was information that was leaked by Mr. Ghost Gaming on Youtube. Tencent has worked very well on the map. Erangel 2.0 will first come to the upcoming Chinese PUBG Mobile Beta update on this January.

About the Global version?

Erangel 2.0 was introduced in PUBG PC back in 2019. Since then players are expecting this map in PUBG Mobile. Since we already have the 0.17.0 beta live and it doesn’t have Erangel 2.0 in it. However, there are some small changes were made in the Erangel Map which is only in the Military Base and Mylta Power. So, we can expect Erangel 2.0 remastered version in the 0.17.5 update of PUBG Mobile.
In case you want to read PUBG Mobile 0.17.0 Beta Update Details.
Game for Peace popularly known as the Chinese version of PUBG Mobile is most likely the earlier version of the global version. Both the games are very much similar but Tencent always puts a new update in the Chinese version first. Many articles are also claiming that Erangel 2.0 won’t come to PUBG Mobile which is not true. In that case, we can clearly see that the Chinese version already has the map and it is just a matter of time when its map will be available on the global version of PUBG Mobile too.
I hope learned something new, and thanks for your support!
Also Read:  Increase PC performance to Fix Lags in PUBG Mobile Emulator(Low-End PC)